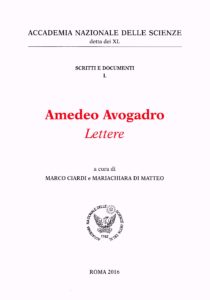 The first collection of the correspondence of Amedeo Avogadro (August 9th, 1776 – July 9th, 1856), the famous scientist from Turin and Academy member, has been published by Marco Ciardi and Mariachiara Di Matteo in a volume edited by the National Academy of Sciences called of the XL. The volume presents a number of unedited letters as a means to encourage scholars and institutions to find new epistolary material related to Amedeo Avogadro.

“(…) The numerous letters, some unedited, presented in chronological order, the rich introduction and the wealth of notes, allow the reader to follow the evolution of Avogadro’s scientific thought and in addition to glance at his personal life’.  From the preface of the president of the Naional Academy of Sciences called Academy of the XL, Emilia Chiancone