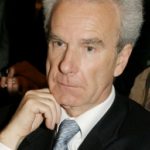 The International Association for Computational Mechanics (IAMC) Gauss Newton Congress Medal, the highest award given by IAMC, has been assigned to Academy member Bernhard Schrefler. The Medal honors scientists who have made outstanding, sustained contributions in the field of computational mechanics over substantial portions of their professional careers.

The Medal carries the image of Newton and Gauss in recognition of the synergy between mathematics, numerical analysis and mathematical modeling of physical events that underpin much of the broad field of computational mechanics. The Medal will be conferred to Academy member Schrefler in the Opening Ceremony of the next World Congress on Computational Mechanics in Seoul (Korea) on July 25, 2016.