“We can defend ourselves from earthquakes”. The new book by Giuliano F. Panza 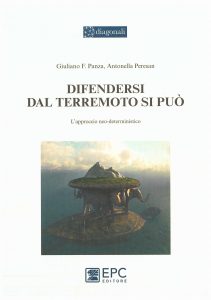 The volume presents the neo-deterministic approach, based on geophysics and available information, that allows one to define vulnerability to earthquakes. It was developed by an international group of seismologists directed by Giuliano F. Panza. Intended for engineers, geologists, professionals in construction and managers of public assets, the volume explains clearly what the neo-deterministic method is and how it works, and the reasons why the probabilistic approach, which is still used by the Italian legislation for structural design, is affected by errors and is thus inadequate.

Giuliano F. Panza, former Professor of Seismology and  lecturer of Geophysics at the Mathematics and Geo-Sciences Department of Trieste University, in charge of the Sand research group at the International Center for Theoretical Physics (ICTP) Abdus Salam, is honorary professor at the Geophysics Institute of the China Earthquake Administration. His scientific activity is characterized by multidisciplinarity: integrated analysis of the structure and dynamics of the lithosphere-astenosphere system; realistic modeling of the propagation of seismic waves; medium term spatio-temporal forecasting of earthquakes. In the framework of a collaboration with the Italian Space Agency (Agenzia Spaziale Italiana, ASI), together with the international research group he directs, he developed a system to define time-dependent seismic vulnerability (NDSHA). These internationally amply recognized scientific merits are related to fundamental results obtained in the geophysics-seismologic field that have most interesting implications for society.